As an event organizer, when you work with your event in Livelox you can use two types of maps:

Livelox supports multiple maps per event. It is useful when different classes or relay legs use different areas. However, a class/relay leg can only be linked to a map.

Maps can be uploaded as picture files in the Swedish Orienteering Federation's map database Omaps. When you have logged into Livelox, click onManage-the link at the top of the page and choose Maps. You are transferred over to Omaps in the inlogged mode. Click again on Manage and choose Maps. 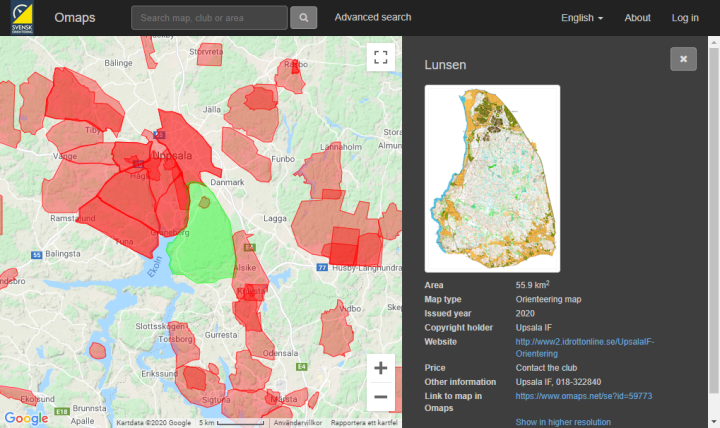 Note that the maps should be loaded in without any form or graphic elements such as map name, border, club logos or something similar. The course should not be in included in the map, and should instead be uploaded separately. By separating the map and the course the sam map can be used over and over again, and you use less time uploading maps.

Omaps requires that the maps that are loaded into the database system are georeferenced. Georeferenced means that the longitude and latitude for the map corners are known. Maps have been created in recent years are most likely georeferenced. The reference system that is the most common for orienteering maps in Sweden is SWEREF 99 TM. Coordinates for flags that sit on the roof of Stockholm's castle in SWEREF 99 TM are N 6580486, E 674763. A unit in SWEREF 99 TM is equivalent to one meter in reality.

If you have a map that is not georeferenced you can reference it simply in conjunction with uploading it. You do this by marking two points in the uploaded map and the related two points in the satellite picture.

Maps that are loaded into Omaps can be shared with other services than Livelox. For every service it is possible to choose which resolution the maps should be shared with. For good quality, Livelox recommends that traditional maps are provided in a resolution of 0.75 pixels per meter. That corresponds to 286 DPI (dots per inch) for a map with scale 1:15 000. For sprint maps, we recommend 2.5 pixels per meter. That corresponds to 254 DPI for a map in the scale 1:4000. Keep in mind that a map in high resolution takes a longer time to load and might make the playback unsmooth, so do not upload excessively high-resolution maps.

If the map is only going to be used for one event in Livelox it can be uploaded directly to Livelox. This is convenient if the map is manipulated in some way, for example a contour line map or corridor map that there is no point in inserting into Omaps. Both image files (e.g. in PNG or TIFF format) and map files (in OCAD or Open Orienteering Mapper format) can be uploaded.

The map needs to be georeferenced, and if it isn't, it can easily done by fitting it into a satellite image just like in Omaps. Image files for maps that are uploaded directly into Livelox are created in the same way as described on the help page for Omaps. Note that the course should not be included in the map image file, but should be uploaded separately. By separating the map and course, the same map can be used for all classes in the event, and start, controls and finish are aligned by their coordinates.